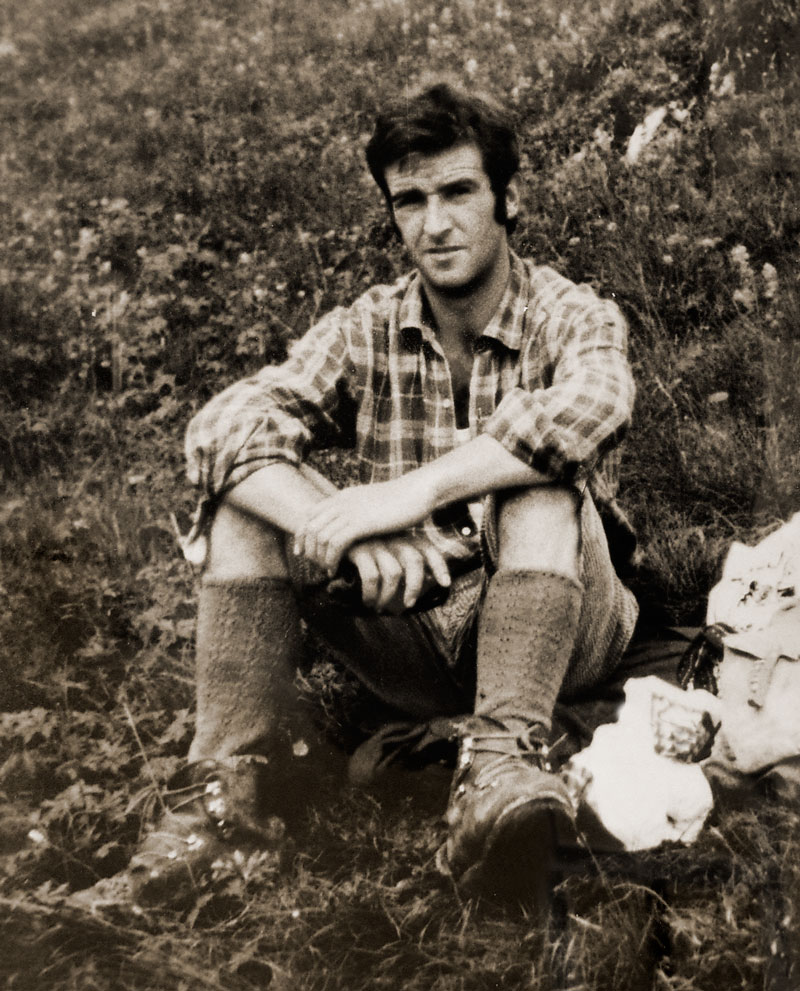 …«Vittorino – born in 1947, dry, strong, he was a man of few words and few acquaintances. (…) Rarely allowed anyone to accompany him in his explorations, which often went on for a couple of days. (…) Military vintage rucksack, camera, lenses, hammer, total love for his home mountains from which never got too far away.

And inside, the fire of passion. What – that from many quarters had been noticed – has meant that the breakthrough in the research of the Mesolithic, especially in Belluno, was brought about by “non- qualified” observers rather than accredited scholars. The case? Maybe it was the case. But, first, it was curiosity, culture DIY, sacrificed weekends, dedicated holidays, patience, comparison. (…)

Certain unique aspects of the life of Vittorino. To start with, who would have thought, profession: confectioner: following in the footsteps of his father who was active in season on ships and in hotels. (…) Then, in 1967, the curious call-up in the Navy because, to learn the secrets of the trade, had moved to Venice to an uncle’s home, owner of a renowed laboratory. Bad business the military service at sea for one who lives in the mountains: Two years is a long time to bear. (…) But at least, at the end of it an advantage: the middle school diploma achieved by taking advantage of the many months wearing his uniform to be on the books again. But it could not last, Venice was not for him. (…) Much better to go back to Pescul as a worker – to the chairlifts, with the Forest Service – and work hard for the barn and the house (…) carving out days for long solitary wanderings to the discovery of traces of the past.

In 1980 the turning point that, on balance, will result in the Museum of Selva di Cadore. “One day – Pierino Lorenzini remembers – makes me go up in the attic of the barn, shows me a bit ‘of fossils that he had collected and says: see if the mayor can fund a showcase to be put in schools with these findings, so children may learn something about where they live”.

Some time goes by, from the idea of the showcase it switches to a more complex project, the conditions ripening for a financial contribution from the Region and in 1982 the city council votes on a list of volunteers (…) called to be part of the organizing committee for the management of the Museum. Committee that in 1989, with a deed, become Association.

But before that, many other events will happen. At that time Ermenegildo Rova, current president of the Friends of the Museum, worked in Udine. He finds a book that describes evidence of Mesolithic populations in the Dolomites, even in areas near Val Fiorentina. (…) The notebook reaches Vittorino. In’a moment, sharp memories came back to him of when, as a baby, he used to go with his with mom to the pastures of Mondeval. Then, under a rock, he was hit by the presence of materials that looked much like those who now he sees described in the publication. The characteristics of the places seem similar. Now Vittorino knows exactly what and where will be his next research. (…) One day in the late spring of 1985, he can go up to Mondeval and when he comes back he has something in hand. (…) It is so that Vittorino starts the fascinating exploration that will lead to the recovery of the remains of the prehistoric hunter of Mondeval de Sora (…).

Meanwhile, for some years, perhaps even from 1970, he had identified footprints of dinosaurs dated 220 million years ago printed on a boulder detached from Pelmetto. A lot of time goes by before he decides to talk to someone about it. More time goes by still before another door is opened to him. But when it happens in a flash news invest the scientific community at the highest levels and Professor Paul Mietto, Professor of Geology stratified in Padua, is the person who will complete the study of this extraordinary discovery. And, immediately after Mondeval, the prehistoric site of the Neolithic and Eneolithic of Mandriz. (…)

And here we are, eleven years later, in the afternoon of Saturday, August 10, 1996, when Vittorino Cazzetta escapes from Pescul. (…) He goes away and disappears»…

Text excerpt from “A date with destiny in the cave at the Piz del Corvo” by Sergio Sommacal.

He’s been unsuccessfully searched for over a year until sadly his body was found on the top of the slot of the Piz del Corvo. In the backpack next to the body there was also a bronze Madonna made cast by him perhaps, to remember an accident he had suffered eleven years before, never clarified, from which he was luckily saved. It was August 19, 1997, he was 49. The Museum has been since named after him.